My last visit at Danville State Hospital went well, however was the most challenging visit. I sat down alone next to two consumers with severe social and mental capabilities. Although I had been previously, this was my first time completely by myself with consumers. There was one man and one woman, yet very different. I will first begin with the woman. She was old and quiet, and could not move from her chair. We started by playing checkers, and when I had asked if she knew how to play, she shook her head slightly, and said no. When I brought over the game, it was clear her motor and cognitive skills were impaired. She had a lot of issues picking up pieces and had trouble understanding the game when I tried to explain it to her. As we began playing, she started to smile, laugh, and then made fun of the larger woman nearby under her breath. She was eating a snack, and seemed to be content in the rec room. Shortly after we began playing, another consumer became very interested in the game. This man was very excited to see us playing checkers, and was getting highly involved. He began instructing our move, and telling the female consumer when she was doing something wrong. Physically, he could not sit still. He was moving constantly and rubbing his hands on his legs as he would repeat phrases over and over. The woman was clearly annoyed by his presence by making gestures and faces to correspond, but he had no recognition of this. The man then decided to play connect four, and the woman suggested the two of us played instead of her. He got very excited with every game, and wanted to continue playing after our time was up. Throughout all of my time with him, he was speaking the whole time. However, it was interesting to hear that when he came to Danville a few months ago he had not spoken at all. I found this to be surprising as he was so talkative with me. Danville State was an incredible experience, and am grateful for all of the people I have met and encountered throughout this program. I chose a picture of the checkers because it is the game the male consumer was best at, and is apparently undefeated at checkers at the hospital. 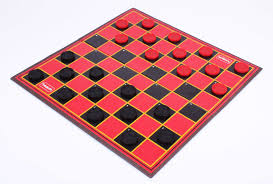